paychecks vs. portfolios; profits back, wages not 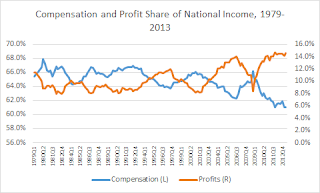 "As the figure shows, the pattern of recent business cycles is the profit share is pro-cyclical and the comp share, counter-cyclical.  But here's the kicker: note that the profit share doesn't just recover from its cyclical lows; it surpasses them, as it has done already in this recovery, while the compensation share just keeps carving out new lows.  And, for the record, compensation itself has of course become more unequally distributed, so these data present only a partial view of the growing inequality problem.

It's a picture of an economy that has been continuously unforthcoming to those who depend on the paychecks as opposed to their portfolios."

--
National Jobs for All Coalition
http://www.njfac.org/
Posted by Chuck Bell at 5:16 AM