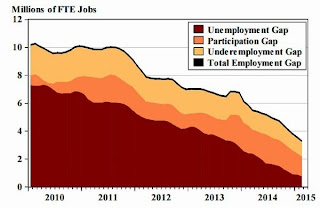 Raising the median wage: Policies that target the middle class

...here are some ideas designed to meet that goal [boosting the median]:

* Full employment: Tight labor markets provide middle-wage workers with the bargaining power they lack when job markets are slack, as they have been, remarkably, 70 percent of the time since 1980. Employment is growing at a decent clip and we're headed in the right direction, but we're not there yet. That means there's still a role for accommodative monetary policy (keeping interest rates low at the Federal Reserve) and growth-oriented fiscal policy (e.g., an infrastructure investment program).

* Trade deficits/manufacturing jobs: We've run large trade deficits for decades in this country and that's cost us millions of better-than-average factory jobs and made it harder to get to full employment (without offsetting bubbles in other sectors). Achieving a better balance between our exports and imports would thus help middle-class workers through both of those channels (more jobs in the tradable-goods sector and tighter job markets). That means taking actions against competitors who manage their currencies to subsidize their exports to us and tax our exports to them.

* Strengthen collective bargaining: While traditional unions in the private sector are down to only about 7 percent of the workforce, the power of collective action was most recently demonstrated by the low-wage workers and their advocates noted above. Moreover, there's a strikingly negative correlation over time between the decline in union density and the share of income going to the top 10 percent (see Figure 32 here). The decline of unions and the ensuing loss of bargaining power is thus a clear factor in middle-class economic insecurity. That means going after state "right-to-work" laws (which undermine bargaining units by allowing for free-riders) and the sharply uneven playing field for those who want to form a union.

* Mid-market employment: There's an incorrect notion that all the middle-class jobs have dried up — we're now a nation of derivative traders and low-end service workers who serve them their food and dry-clean their suits. Wrong, says economist Harry Holzer, who has dived deeply into these waters and found growing demand for mid-level jobs in certain occupations. What's missing is a) enough labor demand to boost the wage offers in these jobs (see "full employment" above) and b) the necessary skill sets. That means developing "a new set of education and training policies and practices" that specifically targets mid-level growth occupations.

* Work/family balance: In our workforce, those who most need flexibility at work are often the least likely to get it. A single-parent in a low-paying, hourly job with shaky child care has the least ability to deal with a scheduling hiccup, while a denizen of the top 1 percent with Cadillac child care can typically take off whenever he or she needs to. I'd also put gender pay equity under this rubric (note median wage gender gap of 17 percent in the figure above). That means paid sick leave, robust maternal and paternal leave policies, worker-centered scheduling, rid the tax code of any discrimination against caregivers, and equal-pay-for-equal-work legislation.

Introduction to the Living Wage Calculator   look up by state

Even as the economy has at last begun to expand at a more rapid pace, growth in wages and benefits for most American workers has continued its decades-long stagnation. Real hourly wages of the median American worker were just 5 percent higher in 2013 than they were in 1979, while the wages of the bottom decile of earners were 5 percent lower in 2013 than in 1979.BlogThis!Share to TwitterShare to FacebookShare to Pinterest

What Americans think the wealth distribution is, what they think it should be, and what it is.

Economic Inequality: It's Far Worse Than You Think

The great divide between our beliefs, our ideals, and reality  March 31, 2015 |By Nicholas Fitz

In a study published last year, Norton and Sorapop Kiatpongsan used a similar approach to assess perceptions of income inequality. They asked about 55,000 people from 40 countries to estimate how much corporate CEOs and unskilled workers earned. Then they asked people how much CEOs and workers should earn. The median American estimated that the CEO-to-worker pay-ratio was 30-to-1, and that ideally, it'd be 7-to-1. The reality? 354-to-1. Fifty years ago, it was 20-to-1. Again, the patterns were the same for all subgroups, regardless of age, education, political affiliation, or opinion on inequality and pay. "In sum," the researchers concluded, "respondents underestimate actual pay gaps, and their ideal pay gaps are even further from reality than those underestimates."

These two studies imply that our apathy about inequality is due to rose-colored misperceptions. To be fair, though, we do know that something is up. After all, President Obama called economic inequality "the defining challenge of our time." But while Americans acknowledge that the gap between the rich and poor has widened over the last decade, very few see it as a serious issue. Just five percent of Americans think that inequality is a major problem in need of attention. While the occupy movement may have a tangible legacy, Americans aren't rioting in the streets.

One likely reason for this is identified by a third study, published earlier this year by Shai Davidai and Thomas Gilovich that suggests that our indifference lies in a distinctly American cultural optimism. At the core of the American Dream is the belief that anyone who works hard can move up economically regardless of his or her social circumstances. Davidai and Gilovich wanted to know whether people had a realistic sense of economic mobility.

The researchers found Americans overestimate the amount of upward social mobility that exists in society. They asked some 3,000 people to guess the chance that someone born to a family in the poorest 20% ends up as an adult in the richer quintiles. Sure enough, people think that moving up is significantly more likely than it is in reality. Interestingly, poorer and politically conservative participants thought that there is more mobility than richer and liberal participants.....

By overemphasizing individual mobility, we ignore important social determinants of success like family inheritance, social connections, and structural discrimination. The three papers in Perspectives on Psychological Science indicate not only that economic inequality is much worse than we think, but also that social mobility is less than you'd imagine. Our unique brand of optimism prevents us from making any real changes.

George Carlin joked that, "the reason they call it the American Dream is because you have to be asleep to believe it." How do we wake up?

[NJFAC] Great News: Wage Growth In America Has Never Been Higher... For Your Boss

Several weeks ago we revealed the "The Mystery Of America's Missing Wage Growth" in which we showed why matter how hard the Fed tries to push the S&P 500 higher (and it has certainly done an admirable job of manipulating the market to record highs), it has over the past 7 years failed to trickle down any of this redistributed "wealth" in the form of rising wages for US workers. Or rather, for most US workers. Because as usually happens, this is a story with two parts.

First, the main reason why wage growth remains subdued, and 50% below the Fed's target, has to do with what continues to be record slack in the economy ....

According to the BLS there were 98.4 million "production and non-supervisory" private workers in March, or 82.5% of the total 119.3 million private workers employed in the same month. This also means that there are about 17.5% supervisory, or "boss" jobs in the US.

It is the distinction between the two that is critical. Because as the BLS also reported today, in addition to a disappointing 2.1% wage growth for all US employees, this was accompanied by an even more disappointing 1.56% annual increase in compensation for the majority of America, i.e., its non-supervisory workers, whose average hourly earnings rose from $20.50/hour a year ago to $20.86 in March.

In fact, as the chart below shows, wage growth of "supervisory" workers has never been higher!