By: David Cox
Unless you have been hiding in a nuclear bunker or sailing your yacht in the Mediterranean, you already know the US job market is dismal. Millions of unemployed and underemployed Americans of all ages, struggle seeking work in this new job environment. Because it's not just the quantity of jobs available that's changed, it's the very nature of employment itself. Even the jargon and vernacular of employment has changed.
....

In today's Orwellian job market; "Entry-Level" means whatever the employer wants it to mean. Entry-level Neurogeneticist needed! Obviously, if you've earned a Master's Degree or a PhD, you can't conceivably be considered for an "Entry-Level" position and that's just the point. What once meant, any warm body willing to learn and do the job, has become the first hurdle for the over-qualified. The employer doesn't care that your unemployment ran out two weeks ago or that you're looking eyeball to eyeball at destitution. "A PhD. in the shipping department? I don't know."

Entrepreneurial = A Ralph Cramden scheme where you don't get paid or you get paid commission only, when the product takes off. We've developed a great new app for your smart phone and we're looking for marketing reps with an entrepreneurial spirit! So if you earn $ 5.00 per sale, you'd need 60 sales to earn $300. Hypothetically, if you placed an Internet Ad with a 1% conversation rate you would need 600 views for each sale. But to place that ad on the Internet would cost you more than $300 whether the app sells or not. So the companies "entrepreneurial" strategy is to hire 10 or 20 thousand sales reps each making one or two sales.

Equity = again, you don't get paid or you get paid in Monopoly money. We're a well-funded start-up. You now own 10,000 shares of Fingerupmynosedotcom  and if we all work very, very hard, we could be as big as the Huffington Post someday. Mark Twain called it, "getting drunk on the smell of somebody else's cork."

A job application is now a "Career Opportunity Packet." Page one: Applicant/Employee Disclosure and Authorization under the Fair Credit Reporting Act. Now understand this isn't just a nosey intrusion into your private life, Nah.

http://my.firedoglake.com/davidcox/2014/06/29/adventures-in-job-hunting/
--
National Jobs for All Coalition
http://www.njfac.org/
--
This list is only for announcements, so you may not post.
---
You received this message because you are subscribed to the Google Groups "goodjobs" group.
To unsubscribe from this group and stop receiving emails from it, send an email to goodjobsforall+unsubscribe@googlegroups.com.
For more options, visit https://groups.google.com/d/optout.

For many poor black men, the threat of capture and confinement looms. 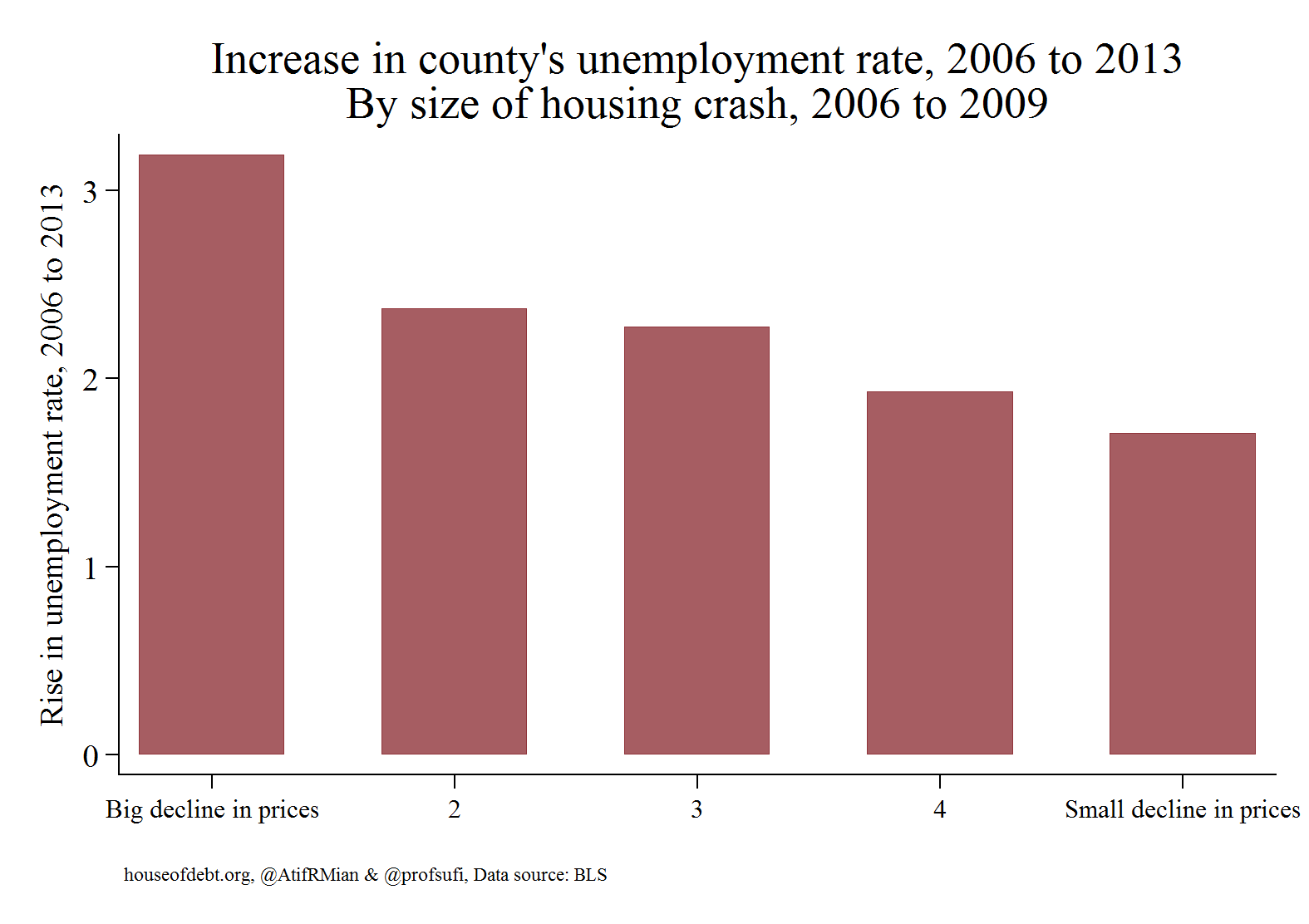 [NJFAC] Why Do Coal Mining Jobs Matter So Much More Than Jobs Lost to Trade?

Why Do Coal Mining Jobs Matter So Much More Than Jobs Lost to Trade?

When President Obama announced plans to curtail the use of coal over the next fifteen years major news outlets like National Public Radio and The New York Times rushed to do pieces on the prospective loss of jobs in coal mining areas. There are a bit less than 80,000 workers directly employed in the coal industry. A large percentage of these jobs will be lost in the next fifteen years due to these regulations.

While it is good to see the media paying attention to this job loss and its implications for families and communities, this concern is a striking departure from normal practice. This was demonstrated clearly last week when the Commerce Department reported a large jump in the trade deficit for April. The report, and the implied job loss, received almost no attention from the media.

To remind folks who never suffered through an intro economics course or forgot their suffering, a trade deficit means that demand generated in the United States is going overseas. Money spent by businesses or consumers is going for goods and services produced in Europe, Mexico, and China rather than in United States.
....

This implied job loss from this rise in the trade deficit over the prior three months is roughly ten times the number of jobs at risk in the coal industry over the next fifteen years. Yet there was not a story in any major media outlet that highlighted the jobs put in jeopardy by a growing trade deficit.

It is worth noting who benefits from the trade deficit. Major retailers like Walmart have worked for decades to develop low cost supply chains in the developing world. They make a point of buying products from China, Cambodia, Bangladesh, or anyone else who delivers goods at rock bottom prices. They would not be pleased by measures to reduce the trade deficit.
....

Why Don't the Unemployed Get Off Their Couches? June 4, 2014 By Peter Van Buren


....Shouldn't we cut public assistance and force people into the job market?

At some point in any discussion of jobs, someone will drop the nuclear option: cut federal and state benefits and do away with most public assistance. That'll motivate people to find jobs — or starve. Unemployment money and food stamps (now called the Supplemental Nutrition Assistance Program, or SNAP) encourage people to be lazy. Why should tax dollars be used to give food to people who won't work for it? "If you're able-bodied, you should be willing to work," House Majority Leader Eric Cantor said discussing food stamp cuts.

The problem with such statements is 73% of those enrolled in the country's major public benefits programs are, in fact, from working families — just in jobs whose paychecks don't cover life's basic necessities. McDonald's workers alone receive $1.2 billion in federal assistance per year.

Why do so many of the employed need food stamps? It's not complicated. Workers in the minimum-wage economy often need them simply to survive. All in all, 47 million people get SNAP nationwide because without it they would go hungry.

.... Why are Walmart and other businesses opposed to SNAP cuts?

Public benefits are now a huge part of the profits of certain major corporations. In a filing with the Securities and Exchange Commission, Walmart was oddly blunt about what SNAP cuts could do to its bottom line:

How much profit do such businesses make from public assistance? Short answer: big bucks. In one year, nine Walmart Supercenters in Massachusetts received more than $33 million in SNAP dollars — more than four times the SNAP money spent at farmers' markets nationwide. In two years, Walmart received about half of the one billion dollars in SNAP expenditures in Oklahoma. Overall, 18% of all food benefits money is spent at Walmart.

Pepsi, Coke, and the grocery chain Kroger lobbied for food stamps, an indication of how much they rely on the money. The CEO of Kraft admitted that the mac n' cheese maker opposed food stamp cuts because users were "a big part of our audience." One-sixth of Kraft's revenues come from food stamp purchases. Yum Brands, the operator of KFC, Taco Bell, and Pizza Hut, tried to convince lawmakers in several states to allow its restaurants to accept food stamps. Products eligible for SNAP purchases are supposed to be limited to "healthy foods." Yet lobbying by the soda industry keeps sugary drinks on the approved list, while companies like Coke and Pepsi pull in four billion dollars a year in revenues from SNAP money.

http://www.nakedcapitalism.com/2014/06/dont-unemployed-get-couches.html
--
National Jobs for All Coalition
http://www.njfac.org/
--
This list is only for announcements, so you may not post.
---
You received this message because you are subscribed to the Google Groups "goodjobs" group.
To unsubscribe from this group and stop receiving emails from it, send an email to goodjobsforall+unsubscribe@googlegroups.com.
For more options, visit https://groups.google.com/d/optout.