Dr. King, The March on Washington, and Full Employment

[With] the 50th anniversary of the historical civil rights march on Washington, a number of analyses have raised hard questions about the lack of economic progress among African-Americans.  The WaPo notes, for example, that:

"If you look at 50 years after the 1960s civil rights movement, the most stubborn and persistent challenge when it comes to the nation's racial challenge remains in the areas of economics and wealth," said Marc Morial, president of the National Urban League.

That's unquestionably true, and yet, these sweeping analyses risk overlooking some important evidence right there in the data that Dr. King would have recognized as entirely consistent with where he was trying to take the movement when his life was so tragically cut short.

It's about full employment, something I go on about a lot around here.  Remember, it was called the "March on Washington for Jobs and Freedom" (my bold).  And when he was taken from us, Dr. King was leading the "Poor People's Campaign," organized around the need for jobs, health care, and housing.

The last time this economy was operating with truly tight labor markets, back in the latter 1990s, I was quite struck by the gains made by African-Americans, both in absolute terms and relative to whites.  Here's just a small table, the work of a few minutes, which makes the case on a number of key economic variables. 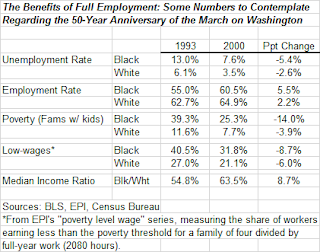 –Between 1993 and 2000, the national unemployment rate fell from 6.9% to 4%, a decline of about three percentage points (ppts).  But African-American unemployment fell 5.4 ppts, about twice the decline of white unemployment.

–Employment rates—the share of the working-age population with a job—went up 5.5 points for blacks and 2.2 for whites.

–The poverty rates of black families with kids fell a whopping 14 ppts over those years, close to four times the 4 point decline for white families.  It's also true that 2000 marked an all-time low in the poverty rates for blacks.

–The ratio of black median income to that of whites rose almost 9 ppts to its highest level on record going back to 1947.

These statistics focus on the relative trends, but it is of course disarmingly clear that the levels in the table reveal great racial disparities.  Even with the noted gains, black family poverty was many multiples of the rate for whites.  Even at its peak, the income ratio was below two-thirds.

But you'll never get to the levels you desire without the trends moving in the right directions, and for that to happen, we need to get back to full employment.

....[Dr. King] recognized not only the role of racial discrimination, but the systematic lack of opportunity facing the disadvantaged in an economy that left large swaths of workers behind.

And from his early involvement with the Montgomery bus boycott to his last speech on behalf of Memphis sanitation strikers, King realized the power of the economic leverage as part of the solution.  In full employment labor markets, it's more expensive for employers to discriminate.  They risk leaving profit on the table if they're unwilling to reach more deeply into the unemployed labor pool.

I want to be careful not to over-claim: full employment will neither solve everything nor cure the nation of the disease of racial bias.  But it will help, and if history is much of a guide, it will help a lot.