The Rich Get Richer Through the Recovery 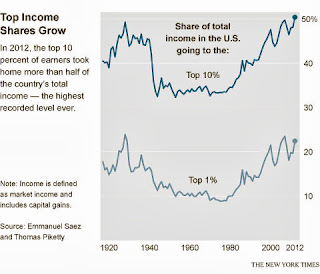 The top 10 percent of earners took more than half of the country's total income in 2012, the highest level recorded since the government began collecting the relevant data a century ago, according to an updated study by the prominent economists Emmanuel Saez and Thomas Piketty.

The top 1 percent took more than one-fifth of the income earned by Americans, one of the highest levels on record since 1913, when the government instituted an income tax.....

High stock prices, rising home values and surging corporate profits have buoyed the recovery-era incomes of the most affluent Americans, with the incomes of the rest still weighed down by high unemployment and stagnant wages for many blue- and white-collar workers.....

More generally, richer households have disproportionately benefited from the boom in the stock market during the recovery, with the Dow Jones industrial average more than doubling in value since it bottomed out early in 2009. About half of households hold stock, directly or through vehicles like pension accounts. But the richest 10 percent of households own about 90 percent of the stock, expanding both their net worth and their incomes when they cash out or receive dividends.

The economy remains depressed for most wage-earning families. With sustained, relatively high rates of unemployment, businesses are under no pressure to raise their employees' incomes because both workers and employers know that many people without jobs would be willing to work for less. The share of Americans working or looking for work is at its lowest in 35 years.

There is a glimmer of good news for the 99 percent in the report, though. Mr. Piketty and Mr. Saez show that the incomes of that group stagnated between 2009 and 2011. In 2012, they started growing again — if only by about 1 percent. But the total income of the top 1 percent surged nearly 20 percent that year. The incomes of the very richest, the 0.01 percent, shot up more than 32 percent.....

[Sorry for two in one day, but Saez-Piketty report too significant to resist. jz]
--
National Jobs for All Coalition
http://www.njfac.org/
--
This list is only for announcements, so you may not post.
---
You received this message because you are subscribed to the Google Groups "goodjobs" group.
To unsubscribe from this group and stop receiving emails from it, send an email to goodjobsforall+unsubscribe@googlegroups.com.
For more options, visit https://groups.google.com/groups/opt_out.