[NJFAC] tax rate falls for top 1 percent as they get richer; majority at $100k and up for government policy to reduce inequality

Once you're in the top 1 percent, your tax rate gets lower as you get richer Dylan Matthews June 2, 2015

The top 0.001 percent of US income tax filers — who account for only 1,361 returns and each earned over $62 million — paid an average federal tax bill of 17.6 percent in 2012. That's striking, because the top 1 percent had an average bill of 22.83 percent, according to IRS data. In fact, the richer the rich get, the lower their average tax rate: 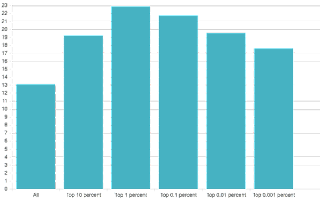 It's important to distinguish the "average tax rate" here from the marginal tax rate. This was 2012, when the top marginal tax rate was 35 percent; it's since grown to 39.6 percent as part of the fiscal cliff deal that year.

No one actually pays that much as a share of income. For one thing, deductions, exemptions, and credits mean that taxable income is lower than actual income. For another, the lower brackets serve to reduce the overall burden for top earners. But the most crucial factor in reducing the tax burden of the ultra-rich relative to the merely rich is probably the preference the tax code gives to investment income. While earned income now faces a top rate of 39.6 percent, long-term capital gains and dividends are taxed at 20 percent. There's an additional 3.8 percent surtax that Obamacare added, but even throwing that in, there's a big discrepancy. (In 2012, the year the above data is from, the top capital gains rate was 15 percent and there was no surtax.)

And the uber-rich tend to make most of their money from capital gains and dividends. IRS data on the top 400 tax returns in 2012 — an even more select group than the top 0.001 percent — shows that the returns accounted for about $134.3 billion in adjusted gross income, total, and that $91.9 billion of that (68.4 percent) came from capital gains and dividends subject to preferential tax rates. A mere $10.1 billion (7.5 percent) came from salaries and wages.

There are plausible economic reasons to keep the discrepancy in tax rates in place, but it does have the perverse effect of making the federal tax code quite lenient on the richest of the rich. 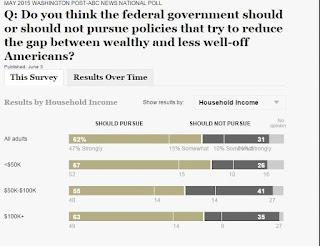 http://www.washingtonpost.com/page/2010-2019/WashingtonPost/2015/06/03/National-Politics/Polling/question_15679.xml#
but probably not the very top j
--
National Jobs for All Coalition
http://www.njfac.org/
--
This list is only for announcements, so you may not post. To contact the list manager, write to njfac [at] njfac.org
---
You received this message because you are subscribed to the Google Groups "goodjobs" group.
To unsubscribe from this group and stop receiving emails from it, send an email to goodjobsforall+unsubscribe@googlegroups.com.
For more options, visit https://groups.google.com/d/optout.