[NJFAC] Half of American Families Staring at Financial Catastrophe

Half of All American Families Are Staring at Financial Catastrophe

And they're turning to payday loans and other lenders of last resort when crises occur. Kriston Capps May 29, 2015

"Forty-seven percent of respondents say they either could not cover an emergency expense costing $400, or would cover it by selling something or borrowing money," reads this year's annual report.

Maybe Americans are feeling better about their finances, as The Wall Street Journal puts it, but that figure is a downer. Several years into the recovery, almost half of all U.S. households could not withstand a minor financial shock without incurring debt or liquidating assets.

Forty-seven percent of respondents could not cover an emergency expense of $400, or would have to sell something or borrow money.

"Even prior to the [Great Recession], and more acutely after the recession, it's true, American households are vulnerable," says Gregory B. Mills, senior fellow at the Urban Institute. "Depending upon the measure you use, somewhere between one-third and one-half of households are at great risk—as in, they would be unable to fend off hardship."

Families' savings not where they should be: That's one part of the problem. But Mills sees something else in the recovery that's more disturbing. The number of households tapping alternative financial services are on the rise, meaning that Americans are turning to non-bank lenders for credit: payday loans, refund-anticipation loans, pawnshops, and rent-to-own services.

According to the Urban Institute report, the number of households that used alternative credit products increased 7 percent between 2011 and 2013. And the kind of household seeking alternative financing is changing, too. 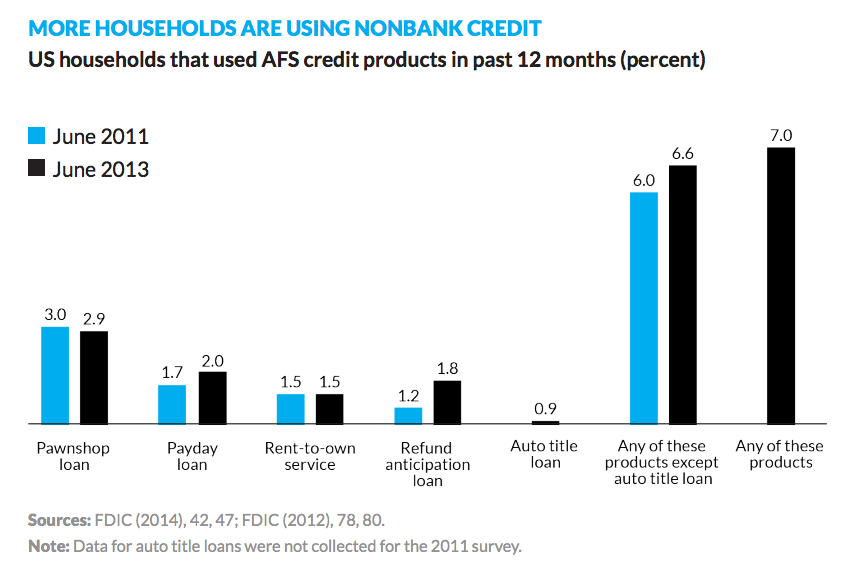 While that figure might seem small—it's an increase of about 750,000 households total—it's a significant figure for the economy in recovery. Families that are looking for credit aren't finding it in mainstream financial institutions. "You used to be able to get small loans for reasonable rates, below 36 percent," Mills says. "That's what's opened the door for more predatory products."

The nature of households looking for alternative financial products, including predatory loans, has morphed during the recovery. According to Mills's research, the share of households seeking non-bank credit with incomes above $30,000 increased from 42 to 48 percent between 2011 and 2013. And the share making more than $75,000 increased from 7 to 11 percent over the same span. 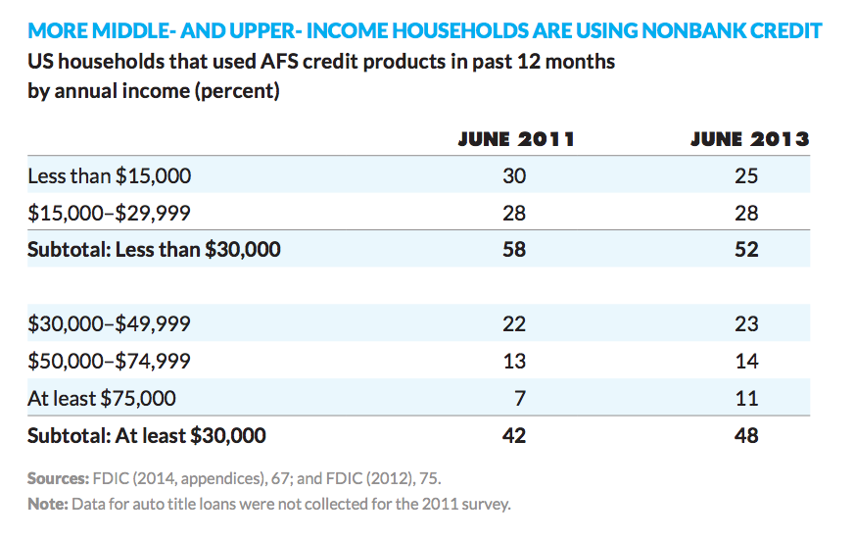 It's not the case that every one of these middle- and upper-class households turned to pawnshops and payday lenders because they got whomped by an unexpected bill from a mechanic or a dentist. "People who are in these [non-bank] situations are not using these forms of credit to simply overcome an emergency, but are using them for basic living experiences," Mills says.

Still, survey respondents who said they couldn't weather a $400 hit are bound to be some of the same folks who are turning to non-bank lenders for routine expenses. That's a huge problem nationwide. Alternative financial services come with steep interest rates, especially payday lenders, which lock borrowers into vicious lending cycles with interest rates north of 400 to 500 percent. The Consumer Financial Protection Bureau is moving to regulate the payday lender sphere—which is a good start.

Here's another disquieting finding from the Fed: "Nearly a third of respondents went without some medical treatment in the past year because they could not afford it." Later this summer, 7.5 million Americans will find out whether or not they will get to keep their healthcare policies. Guess they better cross their fingers.

[Have you wondered why output growth is slow? J]
--
National Jobs for All Coalition
http://www.njfac.org/
--
This list is only for announcements, so you may not post. To contact the list manager, write to njfac [at] njfac.org
---
You received this message because you are subscribed to the Google Groups "goodjobs" group.
To unsubscribe from this group and stop receiving emails from it, send an email to goodjobsforall+unsubscribe@googlegroups.com.
For more options, visit https://groups.google.com/d/optout.