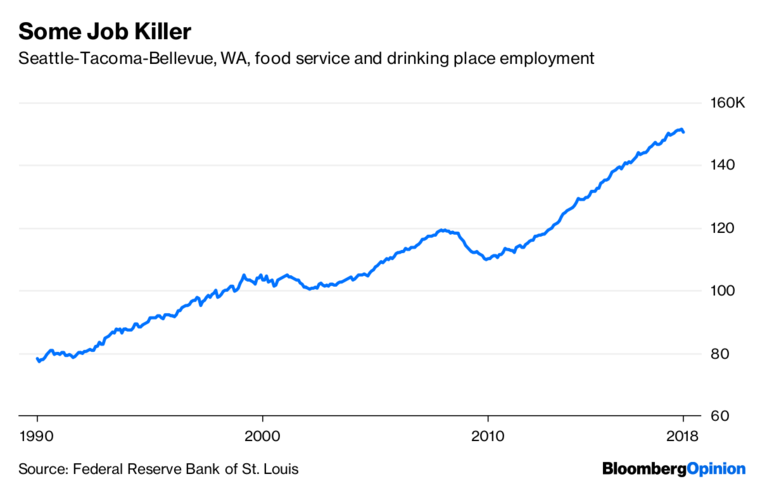 Earlier this year, a group of business school researchers from the University of Washington and NYU, as well as Amazon, published an influential paper claiming that the rising Seattle minimum wage had decreased take-home pay for workers by 6% due to cuts to work hours -- the paper was trumpeted by right-wing ideologues as examples of how "liberal policies" hurt the workers they are meant to help.
But a new paper by the same authors (Sci-Hub mirror) shows that the rising minimum wage generated major increases for the workers who had the most hours, whose hours were only cut a little, but still came out ahead thanks to the wage increase; workers with fewer hours saw no financial harm from the rising minimum wage, working fewer hours and bringing home the same sum; and they found some harm to people who had the smallest number of hours) (which may actually reflect stronger demand for workers and fewer workers in this category of very-low-hour work).
The study's authors explain that their findings are all consistent with one another, but people who found methodological flaws in the first study say that the reversal is inevitable. Here's Barry Ritholz (previously) in Bloomberg:....
--
June Zaccone
National Jobs for All Coalition
http://www.njfac.org
--
This list is only for announcements, so you may not post. To contact the list manager, write to njfac [at] njfac.org
---
You received this message because you are subscribed to the Google Groups "goodjobs" group.
To unsubscribe from this group and stop receiving emails from it, send an email to goodjobsforall+unsubscribe@googlegroups.com.
For more options, visit https://groups.google.com/d/optout.