[NJFAC] How big is the gig economy?

The gig economy is actually smaller than it used to be, Labor Department says
"In May 2017, the Labor Department counted 5.9 million people, or 3.8% of workers, in what it calls contingent jobs, which are those that the workers don't expect to last or that workers call temporary. In 2005, the last time the government looked into the issue, there were 4.1% of workers who classified themselves this way. Other classifications of these kinds of alternative arrangements either declined or stayed the same....
One key caveat: the government is measuring the job in which they usually work the most hours. The government notes it is still evaluating survey data on a question of those who found short tasks or jobs through a mobile app or website. "
The BLS report is at https://www.bls.gov/news.release/pdf/conemp.pdf
Here is another accounting:

Opinion: If the economy is so great, why are 78 million hustling for dimes? Nutting, Marketwatch 6/4/18
Millions of people are working erratic shifts, or scrambling for extra cashOverall in 2017, 31 percent of all adults engaged in
gig work in the month before the survey, up slightly
from 28 percent in 2016. 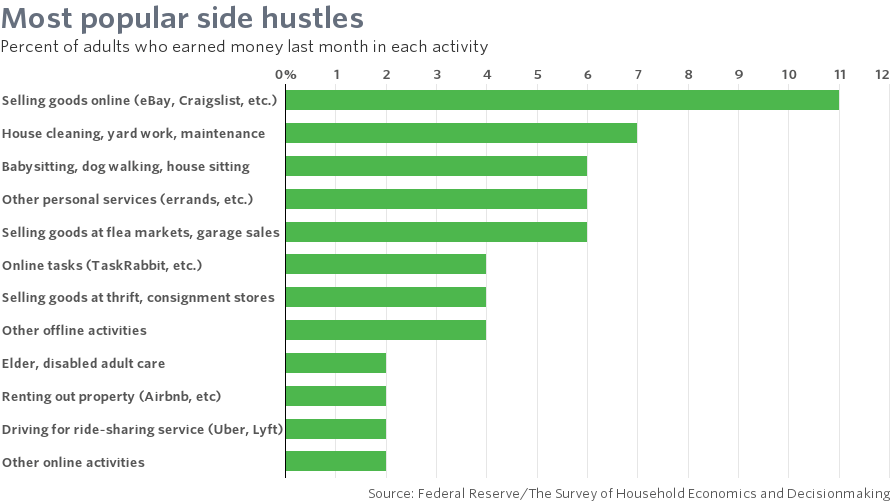 "Overall in 2017, 31 percent of all adults engaged in gig work in the month before the survey, up slightly from 28 percent in 2016." p. 19, Fed. Res. report.
--
June Zaccone
National Jobs for All Coalition
http://www.njfac.org
--
This list is only for announcements, so you may not post. To contact the list manager, write to njfac [at] njfac.org
---
You received this message because you are subscribed to the Google Groups "goodjobs" group.
To unsubscribe from this group and stop receiving emails from it, send an email to goodjobsforall+unsubscribe@googlegroups.com.
For more options, visit https://groups.google.com/d/optout.