"...A common argument claims that cutting the length of time that people can collect unemployment benefits forces people to find jobs faster. If this were the case, we would expect to see the share of people with jobs increase after cuts went into effect in states that cut unemployment insurance. Instead, the share of people employed actually lagged the national average in the three states that most drastically cut unemployment insurance benefits after the Great Recession—Florida, Georgia, and North Carolina." 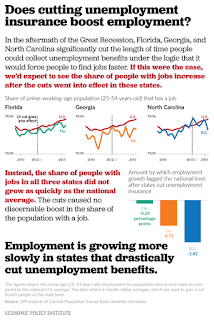 ​
Read the report at:   on.epi.org/1W5CTzH
--
This list is only for announcements, so you may not post. To contact the list manager, write to njfac [at] njfac.org
---
You received this message because you are subscribed to the Google Groups "goodjobs" group.
To unsubscribe from this group and stop receiving emails from it, send an email to goodjobsforall+unsubscribe@googlegroups.com.
For more options, visit https://groups.google.com/d/optout.